Several weeks ago, The Atlantic reported on a study conducted by OkCupid detailing how attitudes towards sex (at least of the 12 million people who use the app) have changed over the last ten years.

I (Julia) and Jason decided to come up with five questions based on this article to see how our perspectives of the past decade line up, especially because I was transitioning from a teenager to an adult and Jason had just reached his 30s.

Take a look below to see our different takes on the changing attitudes about sex over the past decade:

Jason, 40: “As the world of dating has changed people have become more aware of the danger of sleeping with someone on the first date. Most of this is due to online dating and apps like Tinder or OkCupid. Yes, some people use these apps to hook up, but many others use them to meet others in the hopes of finding a mate. Because of this, people are learning to be more cautious in the short term; individuals using such services to find committed relationships are typically more careful in the early stages.”

Julia, 25: “In general people have way more access to information about sex via the Internet. Not that sleeping with someone on the first date was ever a ‘novelty’ per se, but it seems like the idea/risk of a one-night stand became less ‘glamorous’ as people had more information about not only STDs, but now unlimited access to accounts of sex and/or pregnancy horror stories. Because this study was done by OkCupid, I believe there’s a possibility people became more aware that because of the now limitless options of partners online, it’s more established that you may not be ‘as special’ right away; your date can easily move on from you with a plethora of other partners at the touch of a button.” 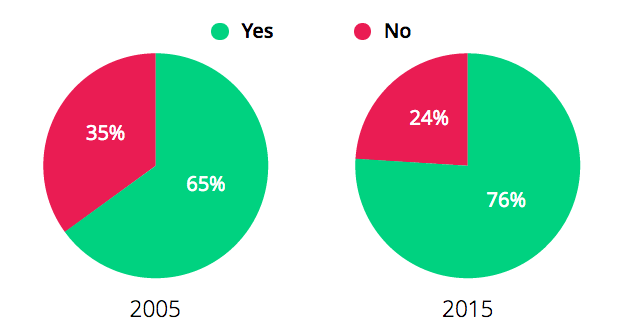 From OKCupid’s research: “Would you need to sleep with someone before you considered marrying them?”

In 2005, what was the general attitude among your peers towards online dating?

Jason: “Online dating was still in its infancy. In fact, the most common places to meet someone were through friends, family, and church. Yes, church still played a role in helping people meet in 2005! Today that stat has all but disappeared. Most people I knew, including myself, didn’t really see online dating as a viable option. And those that did kept it a secret. I knew people who met, fell in love, and even got married, yet never told anyone the truth of how they had met (online). Online dating only recently became normalized, and these couples finally admitted how they met because they didn’t feel as judged as they might have back in 2005.”

Julia: “I was 15, so online dating had a huge stigma; only older people desperate for a relationship used online dating! So online dating was not really a thing among my peers. Our biggest online space at the time was MySpace. MySpace was not explicitly conducive for dating, but it was one of the first spaces online where you could declare your relationship status. You could also flirt back and forth with someone or your significant other in the public comments section of their profile or your profile. So in a way, 2005 marked the first time, for me, that dating became more of a public thing to be ‘judged’ in an online setting, outside of face-to-face relationships at school.”

“Is it okay for a woman to talk openly about her sexual exploits?”

In 2005, what was the cultural attitude (among your peers) towards women talking openly about their sexual exploits?

Jason: “There has been a gigantic shift when it comes to women and sex. I was always aware of some women sharing exploits with other women but never openly so all could hear. Something I find striking about this data is it is in line with the impact pornography is having on our culture. Women (and men) are being sexualized at a rate never before seen. Our thoughts on sex, the conversations we have surrounding sex, and ultimately the way we practice sex are all being shaped by a culture largely impacted by the use of pornography. In 2005 this would have only been a much smaller segment of the population; now it is the majority.”

Julia: “I was a freshman in high school, so women talking about their sexual exploits would have been, in my limited opinion, promiscuous. Especially if those women had been my own peers. Girls who talked openly about their sexual exploits at school (and I don’t recall this being frequent) were considered to be ‘easy’; not necessarily easy sexually, but easy to date because they were always willing and not usually in long-lasting relationships.”

“Is there such thing as having too many sexual partners?”

In 2005, what would you have qualified as the biggest cultural influence on dating? In 2015?

Jason: “In 2005 I would have argued the media (movies, tv, and music) would be the largest cultural influence. The hook-up culture was in full swing and ‘friends with benefits’ were all the rage. Along the same line I was one of the few people speaking about how pornography was shaping a generation to think and act differently when it came to sex. Today, In 2016, we’ve visibly been able to see the impact pornography has had on our society. Yes, media still drives and influences our thoughts on sex and sexuality, but even the media’s influence has grown exponentially since 2005. This is mostly due to the birth and growth of social media where an idea or thought can become a reality within in minutes, from any source.”

Julia: “I might have to say the cellphone, because this was the year when most people my age got their first cell phone. So the fact that you could text someone outside of school, in private, was a big deal. It opened up the world to not just face-to-face, in-school conversations anymore. Dating or liking someone could now be a private thing, rather than in front of all your peers. For 2015, I would say the biggest cultural influence was still very much your cell phone, in the form of apps. Social media and dating apps suddenly put a lot of pressure on dating; no one had an excuse anymore not to be dating, or at least trying to date, because you now had so many ways to meet people. Social media also upped the pressure, in my opinion, to have the most ideal life possible, relationships included.”

“Would you consider sleeping with someone on the first date?”

How has the cultural opinion of sex and dating shifted in the last 10 years, from your personal experience and viewpoint?

Jason: “There is something about this question that saddens me. I’ve been speaking on the issues of sex/sexuality/relationship for a little more than 10 years. Everything I thought we would see (and this data now shows) has become a reality. I think the only thing that is surprising to me is the data showing fewer people sleeping with each other on the first date. But even that data is in line with what I see happening around me today. Specifically, I see a lot of data that shows we are becoming both more liberal AND conservative in our views surrounding sex. Our ideas surrounding sex are all over the place!

Julia: “I grew from teenager to adult during this time, so my experience is based on a very specific life stage. I would say that sex seemed like something that was still very taboo to most people my age in 2005. Dating was frequent, but not necessarily because people wanted to be frequently dating. We were just high school students who didn’t know how to maintain a long-lasting relationship. Dating and sex still very much seemed to hold an element of love; those things should be experienced for the sake of experiencing love. I would say that now dating and sex are treated among the culture at large as a personal life goal, one that adds to our own unique personas and can be recounted as stories that make us seem interesting. Sex in particular has become very individualistic, especially with the drastic rise of gender fluidity, etc. Sex is about finding ourselves and determining how we form our identity.”

What do you think? How do you think the attitudes surrounding sex have changed since 2005?